How long have you been a part of a Droid Building Community?

Started researching around end of 2016, went to my 1st builders meet up during Christmas 2016. Started my build early 2017.

What are your current build? (Droid, Materials etc)

My current main build is a Styrene astromech, I am using the Dave Everett plans. I started building early 2017 had a few hiccups along the way and it has been slow going. Current status is the droid is now on 3 feet and is mobile but still a long way to go.

The droid will end up being a mixed media droid, being made predominantly out of styrene but with steel centre foot, wood shoulders, 3d printed, resin and aluminium greeblies.

I am currently working on Booster covers, which will be 3d printed, I am redesigning them as the groove in the leg doesn’t quite match that of the booster covers – so another skill being learnt.

I will also be making a styrene R5 head very shortly, but I do have a proper aluminium R2 dome in the attic to work on at a later date.

What made you want to build a droid in the first place?

Well, I never really wanted to build one! However my brother, Mark Cox started building one back in 2015. He took his WIP droid to Celebration Europe back in 2016, it was there I saw the R2 builders and what they build and thought maybe I could build one. Now unbeknown to me both my brother and my other half conspired together and bought me a big package of styrene and had the plans printed for my birthday. After a few months of being hugely overwhelmed, it’s now turned into a passion and a very enjoyable hobby.

What future plans do you have for your droid? Constantly upgrading? Show piece? Events droid?

Would really love to finish my droid this year, but we will see! The snow man egg droid will have a makeover in time for the next Christmas builders meet.

Do you have plans to build more droids? If so which one (s)?

I have plans for 1 more 39.1% ALT droid and have a box of mouse droid parts squirrelled away – so watch this space.

Do you have any more droids? If so what other droids do you have either complete or WIP/ planning stages?

I built a 39.1% ALT droid, this is a great, fun droid – after seeing Tim Berry’s droid at Scarborough I knew I had to build one. Not only fun to race but it taught me new skills that I will use on my main astromech. Skills such as finishing 3d prints, painting and setting up and tuning RC systems.

For the Droid builders Christmas meet last year, my other half and I built a Snowman inspired 39.1% ALT droid which I am happy to say won the Christmas droid dress up competition!

What are some of the challenges you have faced during your build?

Numerous to say the least – there has been many times I wanted to quit. In fact I keep a note from the kids, which I keep with my plans, telling me not to give up building R2!!

I’ve never really built anything like this before, so it’s been a massive learning curve. But the biggest lesson I have learnt is don’t follow the plans verbatim be prepared to adapt and change the design to suit. For example I’ve rebuilt several parts and decided there is a better solution and totally rebuilt them from scratch again.

Do you have a ‘proudest moment’? If so what would that be (could be from the build itself or an event)

There’s been a few during the build so far, when I fitted the skins to my frame was a big moment – for the 1st time this pile of hand cut styrene resembled that quirky droid from the films that we know and love. It was probably from that point I knew I could really build a droid!

I love doing events, I like to take my WIP droid along and it’s great to get feedback from fellow builders – a real confidence booster. The public are always in awe of what we build as a group and the common theme is always amazement that we have built these droids.

Are there any parts of the build process that have surprised you with how easy/ hard you found them? (For example something that you thought would be very hard that turned out to be easy for you etc)

Astromech legs have been a massive challenge for me, I’ve had to remake 1 leg and still not 100% happy with them now.

One part I thought would end up being difficult was the ankles, but they just went together so easily and everything fitted where they should. The legs fitted perfect and the ankle fitted the feet nicely too.

What is the most important piece of advice you would give to any new builder?

I know it’s probably a cliché but do your research, read the forums, find build logs etc. It can be very overwhelming for sure but it’s important. The best thing I did was go to a builder’s meet, everybody there started at the same point, everyone is willing to help out and answer questions.

With whatever build method you choose, somebody has probably ventured down the same path before and can offer advice. Don’t be afraid to change things to suit you, just because the build plans say to do one thing does not mean it’s the only way or the best way for you.

Lastly the only critic is yourself, build the droid you want to the attention to detail you want, the build material you want – it matters not to everyone else. It’s also not a race some droids are completed it a few months, others take many years (isn’t that right Chris Williams?). 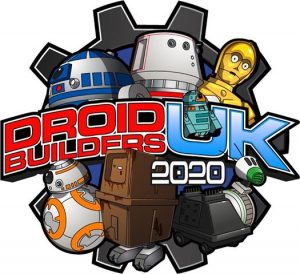